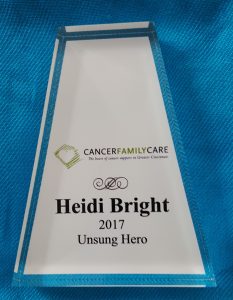 Tara L. Robinson, author of The Ultimate Risk (Hay House, April 2017) and publisher of Whole Living Journal, recently nominated me for one of Cancer Family Care’s 2017 Unsung Hero Patient Awards. The banquet was Tuesday, May 16, in Cincinnati, OH. Here is her nomination. Thank you, Tara!

Heidi is truly an inspiration beyond words. Not only is she an Unsung Hero because of her own personal growth work, but also because she has been determined to help others with what she learned from her experience.

And, let me tell you, what she learned was A LOT!

When Heidi was diagnosed with a rare Stage 4 cancer, she immediately put into action all of her advanced awareness of the mind-body-spirit connection. She turned over every single stone and healing became a full time job for her. She researched, overhauled her diet, maximized the effects of sound meditation, art therapy, dream interpretation, etc. She courageously chronicled the details her journey as it unfolded on her Caring Bridge webpage where friends and family remained on the edges of their seats waiting to see what Heidi discovered next.

She never faltered in her optimistic attitude and eventually made a most difficult, life-changing decision necessary to propel her into remission.

All of us who watched Heidi’s healing trek in awe could see the strong possibility that her online accounts would one day be perfect material for a book. She did, in fact, get right to work compiling all she had learned and experienced into an extensive resource for others on the healing journey. Her book, Thriver Soup, was traditionally published and has been helping patients and families around the world ever since.

I personally have been so inspired by Heidi’s story that I wrote about her in my own book, The Ultimate Risk (Hay House, April 2017) as I recounted why she was the recipient of the first Voices of Women award. Not only was she the first recipient, but she was actually the inspiration for the creation of this award that celebrates and acknowledges “outstanding achievement in personal growth and transformation.” This is the greatest act of service, because as we change ourselves, we change the world. I saw Heidi change the world as she bravely changed herself. The VOW award was created to honor remarkable women who have “risen from the ashes,” or have simply displayed great courage in excavating their inner lives, thereby changing themselves and changing the world…Heidi is the epitome of this award.

Heidi continued to suffer the worst of life’s challenges when her son suddenly passed away. However, her spirit is not to be defeated. She once again drew on the strength and faith she had cultivated during her cancer journey to not only survive, but thrive through even this tragedy.

Heidi is definitely an Unsung Hero and deserves to be honored as such. Our world is a better place because of Heidi Bright.