I don’t know what it is about food your mother makes for you, especially when it’s something that anyone can make – pancakes, meat loaf, tuna salad – but it carries a certain taste of memory.

In 1972, my mother was diagnosed with end-stage breast cancer. She surprised everyone by going into radical remission for seven years.

When the cancer came back, we didn’t know for awhile, but I felt a sickness in my belly on the morning I watched my mom and dad drive off for a trip south. About three hours later I got a call… she had stumbled and fallen—the result of a growing numbness in her spine, which turned out to be the return of the cancer. At the time, I was a teenaged college student. None of us had much of an idea what to do, think, or expect—especially my younger brother, who had just become a teenager. 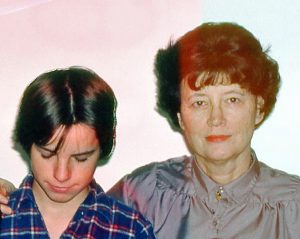 This time the doctors predicted she would live six months. She got Prevention magazine (the only health magazine she probably could get back then), ate better food, and saw a hypnotherapist. Her goal was to live long enough for my younger brother to remember her.

Remarkably, she lived another three years.

She unknowingly taught me to explore options. Perhaps she helped save my life with her example.

All of us came to see her days before she passed. After a short visit I had to get back to Kansas if I wanted to keep my job. There was no hospice. After all us out-of-towners left, she crossed over, alone, in a hospital bed.

I remember the terrible phone call, the endless drive back to Iowa, and the torturous days that followed, like it was yesterday. This was my first real exposure to death.

Of course, I have lost many more people during the intervening 34 years, including my firstborn son.

This spring I listened to some old copies of cassette recordings from my childhood Christmases. With a heavy heart, I realized I had forgotten the sound of my own mother’s voice. I knew by the spoken words it was her, yet the timbre of her voice had faded from my memories.

The taste of her cooking had not. My younger brother was able to visit me this Mother’s Day. His memories of her were far more hazy, yet he remembered certain dishes that gave a feeling of comfort and belonging.

Together we made corn fritters, hamburger pie, Barb-b-cups, cheesecake, springerle cookies, and peanut brittle—unfit food we normally never eat. It brought a feast of memories and even some laughter. My younger son enjoyed the eats.

And I was able to glide busily and deliciously past my third mother’s day without my firstborn son. I appreciate this gift.

What did you do to mark Mother’s Day this year?

2 thoughts on “A Mother, a Brother, and a Hard Holiday”