My father didn’t tell me how to live. He lived and let me watch him do it. 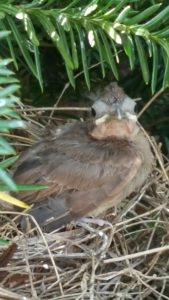 These expectations are enormous and completely unrealistic. Some things simply can’t be fixed. Even Mr. Fixit repeatedly fails in his role of repairing.

When we lose a child, we agonize. “What did I do wrong? Why couldn’t I have fixed it?”

This spring, the cardinal nest next to my porch provided an example for me of some things that simply can’t be fixed–even by devoted fathers.

Sometimes, I caught glimpses of the father cardinal standing next to the nestlings, probably feeding them.

I later learned male cardinals typically protect their territory and provide food for the little family. They even feed the mothers, calling them away from their nests for dinner.

This father clearly was doing his job, because his ugly nestlings grew rapidly.

About ten days after hatching, one of the fledglings perched on the edge of the nest. It had no tail feathers, and simply sat there awhile. Frankly, Fledgling 1 reminded me of a human teenager daring to take off on its own with no parental control.

Mother and Father chirped madly nearby.

As I continued with my day, Fledgling 1 disappeared. My son and I looked around for it a few times, but never saw it again. What became of the bird? Did one of the feral neighborhood cats catch it? It’s quite possible—only 15 to 37 percent of cardinal nests produce fledglings, and Fledgling 1 was quite vulnerable. The dangers were real and close. The parents had no say in what their offspring chose to do or not do. 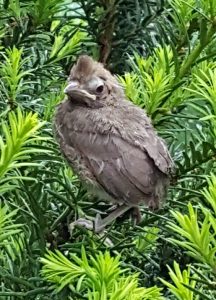 The next day Fledgling 2 perched on the edge of the nest for a while. Later in the day I saw it hop from branch to branch around the shrub.

As I approached, both father and mother took turns flying at the bush and creating a ruckus, flapping madly and chirping with piercing volume. Both did their absolute best to lure me away from their remaining baby. Neither succeeded.

The next day, cardinal chirping slit the air from high in a nearby pine. And then it ceased. Fledgling 2 most likely made it into adulthood.

The parents provided a home, nourishment, and every attempt at a safe environment. Yet perhaps one of the two didn’t make it into adulthood. It is not the parents’ fault. We must accept that we are not in charge, ultimately. We do not control the choices of our children, nor any diseases they might endure. We can provide and influence and plead, but in the end, some things can’t be fixed. All we can do is our best.

May you find peace in the example you set for your loved ones.