As soon as the goddess entered and brushed away the dreams that hovered around her, her brightness lit up all the cave.

In the Greek myth “The Halcyon Birds,” the king of Thessaly dies at sea while his beloved wife Halcyone prays ceaselessly for his return. Halcyone’s prayers are heard by the goddess Hera. Hera can’t bear Halcyone’s pleading for the impossible return of the dead king, so she sends her attendant, the goddess Iris, on a mission. Iris dons her robe of many colors, then paints the sky with a rainbow on her way to deliver Hera’s message to the god of sleep. Hera wants the god of sleep to give Halcyon a dream about the king of Thessaly’s shipwreck so Halcyone will stop her incessant prayers. Iris’ radiance fills the sleeping god’s cave. She delivers her message to the god, then returns by her rainbow to the heavens.

The iridescent rainbow goddess Iris represents a connection between earth and heaven through the bows she creates with her robe—the female version of an Amazing Technicolor Dreamcoat—when she traverses the air. 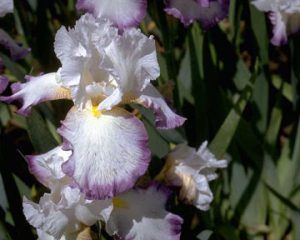 The iris flower bears her name. Symbolically, this bloom bridges earth with heaven because of its great beauty. It represents the ability to communicate messages with those who reside with (the) God(s). If you have lost a loved one to cancer, the iris might take on some extra significance for you.

Irises have been growing for decades at Grailville in Loveland, Ohio, which has served as a spiritual bridge between the human and the Divine. It is sacred ground upon which my 19-year-old son Brennan inspired one final time.

Buckets of extra irises from the property recently found their way into my little car, thanks to Mary Lu. They now are planted in Brennan’s garden behind my home. From sacred ground to hallowed ground, the irises connect the spiritual with the profane, the light with the dark, the living with the deceased. They help bring the Spirit to my son who sought the Spirit in the false highs of heroin. The flowers now provide a symbolic way to communicate with him.

The iris has another symbolic connection for me. Early usage of the French royal symbol, the fleur-de-lis/fleur-de-lys, probably referred to the iris, which grew abundantly along the river Lys, rather than to the lily. The fleur-de-lis is a symbol for the Boy Scouts, in which Brennan earned the Arrow of Light honor.

I look forward to the flowers beaming their iridescent radiance in the spring. There is no more meaningful addition to his garden.

To invoke the energy of the rainbow, or of communication with your loved ones on the Other Side, perhaps meditate with a drop of iris essence or essential oil on your forehead between your eyebrows, or with an iris blossom next to you.