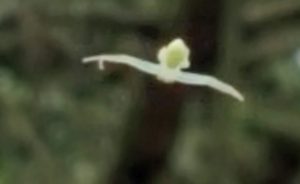 The spider taketh hold with her hands, and is in kings’ palaces.

Small spiders where I live have taken hold of their webbing and descended, appearing right in front of my face.

It’s never happened before, that I recall. Yet it’s happened three times within eleven days, starting on June 5, the three-year anniversary of my son’s passing. It occurred once while I walked under a tree in my yard. Once while I sat in front of my computer on my deck. And once while I sat indoors at my regular desk.

I felt there had to be some significance to this, especially because the first little spider was white. Many years ago a Jungian psychoanalyst gave a presentation about a white spider that appeared in one of her dreams. Once awake, she went to the local bookstore and saw a book called The White Spider. She got an intuitive vibe that this was important for her. The book was about climbers’ first attempts to ascend the north face of the Swiss mountain Eiger. Success entailed crossing a steep, funnel-like, spider-shaped ice field called The White Spider.

Hmmm. I have had my nose to the computer screen for weeks now, working on Grieving an Addict’s section about the opioid epidemic. I was attempting to funnel hundreds of pages of information and 20 interviews into about 25 pages. It included the story about a woman who had severely painful surgeries for cancer treatment, and was on opioids for eight years—not as an addict, but simply to manage the consequences of her surgeries. And she lost her son to opioid addiction. Sometimes I have been overcome with grief, and have shared my sobbing with my sturdy backyard oak tree. It accepts my tears as they pour out, yet continues to stand tall and strong, like a ladder from heaven. Afterward I stare at the calm green foliage, breathe deeply, and try to restabilize my emotions. The terrible agony so many people have endured is beyond comprehension.

Then I go back to my computer. Slowly, paragraph by painful paragraph, the first draft of this section is nearing completion. When the middle spider descended, it attempted to weave a web on the side of my laptop as I typed. Like the spider, I have taken hold of the strands of stories and integrated them into the fabric of understanding.

Weaving is the work of arachnids. And writers. I find it especially interesting that all three spiders used their webbing to descend right in front of my face. According to one website, the ancient Chinese people thought that when a spider dropped down, it was like gifts were dropping down from heaven. I hope they are gifts for writing this book.

Ironically, my deceased son was terrified of spiders. Perhaps he was letting me know, too, that he has been healed of this phobia on the Other Side. That all of us can heal on the Other Side, when we enter into kings’ palaces in paradise. Maybe there can be a good ending to this story for all of us, after all.