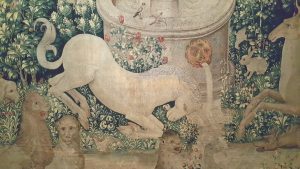 “ … perfectly conscious of the sanitary virtues which resided in its [the unicorn’s] nasal protruberance, and would dip its horn in the water to purify and sweeten it ere it would drink.”

Medieval literature contains references to the horn of the unicorn being full of healing energy, according to William Jackson in The Use of Unicorn Horn in Medicine. “It was even said that poisoned wounds could be cured merely by holding a piece of the horn close to them,” he writes.

Some European royalty claimed to have unicorn horns, and some ceremonial chalices were made from these rare and exotic treasures because they were believed to neutralize poison. These objects most likely were made from the long, single tusks from narwhals, which are medium-sized Arctic whales.

A tapestry at The Met Cloisters in New York City depicts a unicorn dipping its magical white horn into a poisoned stream to purify the water so onlooking animals could safely drink.

Perhaps a little unicorn unction could be useful for dealing with the side effects of poisonous chemotherapy.

During 2014, a five-year-old said she wanted to ride a unicorn when she finished chemotherapy. Lily Raffray’s wish was granted—a party was thrown for her, complete with a ride on a beautiful white horse sporting a unicorn horn.

That seems like some pretty sweet medicine to me.

For fun, add a little unicorn magic to your chemotherapy experience. Place a unicorn on a home altar, wear a unicorn pendant, or cut out a picture of a unicorn and tape it to the chemotherapy infusion bags or your water bottle. Then ask for the blessing of healing unicorn-like unction in your experience to reduce the side effects of the poisons.

Everitt G. Doctors and Doctors. London: Swan, Sonnenschein, Lowrey & Co; 1888, as found in “The Use of Unicorn Horn in Medicine,” The Pharmaceutical Journal, 18 Dec. 2004, by William Jackson, referenced Aug. 11, 2016, from http://www.pharmaceutical-journal.com/news-and-analysis/features/the-use-of-unicorn-horn-in-medicine/20013625.article