Motecuhzoma’s servants “brought him in cups of pure gold a drink made from the cocoa-plant, which they said he took before visiting his wives… I saw them bring in a good fifty large jugs…, all frothed up, of which he would drink a little. They always served it with great reverence.”

The Aztecs gave us cacao, and I am so grateful. There’s nothing quite like a frothy cup of chocolate. Especially as we enter the longest nights of the year in the northern hemisphere. A cup of pure gold made from cocoa can bring light into the depressing darkness.

After I cleaned up my diet in 2005, I tried some commercial hot chocolate once when I could not access my usual chocolate stash. (Confession: Hi, my name is Heidi and I am a chocoholic). To me, it tasted very little of chocolate and mostly of corn syrup.

I never drank it again.

Over the years I have tried various ways of creating a healthy hot chocolate drink. I thought using almond or hazelnut milk would be the cat’s meow. Unfortunately, those “milks” tasted almost nothing like the nuts. I later learned that one company only used four to six almonds for a carton of “almond” milk. The drink largely was made up of fillers. No wonder there was almost no nut flavor to the milk.

I switched to coconut milk until my sister helped me discover that one of the ingredients was titanium dioxide. Who needs that? It’s also an ingredient in sunscreen.

I think I have finally found some 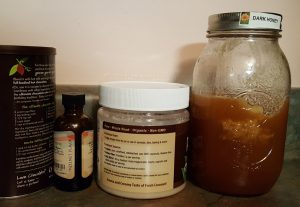 thing that is both healthy and tastes fabulous. A guilt-free chocolate drink. Now that really is the cat’s meow.

My concoction is influenced by my childhood experiences in Germany, when the hazelnut-cocoa spread called Nutella was a special treat. I can now make a raw, vegan warm chocolate drink that is reminiscent of it. I usually have a cup every day and drink it slowly, with reverence.

It makes a nice holiday treat.

You can modify the recipe, depending on your preferences. Here’s what I do.

Warm up some water. The water temperature needs to be warm enough to dissolve your ingredients yet not so hot that it cooks them. That means a temperature under about 110°.

Here are the general proportions I use:

Adjust to match your preferences. I use coconut butter because it retains the fiber from the fruit. If you do not want to keep everything raw, skip the honey because all its good qualities disappear when it is heated. Substitute something else like xylitol or stevia. If you do not have access to coconut butter, try coconut milk—after reading the label. Or make your own nut milk.

Descriptions of cacao being served in the palace of the Aztec emperor, http://www.mexicolore.co.uk/maya/chocolate/early-history-of-chocolate